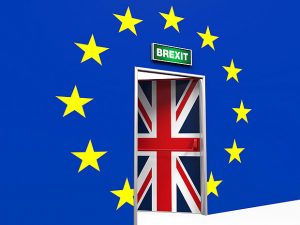 As part of his campaign commentary, Donald Trump proffered the plummeting Pound Sterling in the wake of BREXT, the UK’s vote to leave the European Union, was a great buying opportunity for Americans.

That may or may not be true, depending upon what is being purchased. However, the BREXIT (British Exit) from the EU, I anticipate will have far greater consequences than a mere buying opportunity.  The EU as a whole accounts for the number one trading partner for US exporters. The UK’s standing in 7th place as an export trading partner of the USA is not exactly chump change as well. In millions of dollars, that accounts for $271,988.30¹ and $56,114.60² respectively for 2015!

What has happened since BREXIT?

Since the announcement of the BREXIT vote, the Pound’s value against the US-Dollar has dropped dramatically. Consider this graph from OANDA Currency Services: 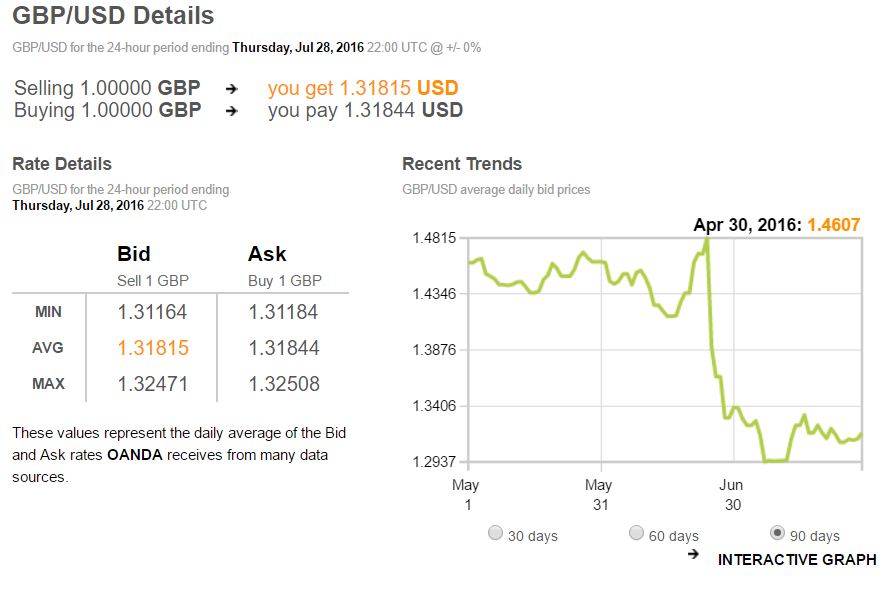 It doesn’t seem like so many years ago that Pound Sterling was trading at £1.00 = $2.50. However, here, in just the time since the dramatic UK vote we see the Pound plummet to $1.32! Traditionally, the Pound was considered as stable a currency as the US dollar. However, now we see significant downward pressure on its value.

What does this mean for U.S. exporters who sell to the UK and the EU?

The long run outlook is still too “iffy” to predict. However, in the short run …

This sounds gloomy, but it could get worse!

There is talk of renewed efforts in both Scotland and Northern Ireland for independence from the United Kingdom since those components of the UK depend upon close trade ties with the EU. Any such move would undoubtedly place even greater downward pressure upon the value of Pound Sterling.

I am not suggesting avoiding trade with UK buyers at all. On the contrary, over the long history with the UK, we’ve cherished their position as valuable and reliable trading partners in a nation who has a sound and efficient civil legal system to protect sellers. However, I do suggest proceeding more cautiously than before, with perhaps stronger trading terms and conditions in the sellers’ favor. Where terms may have previously been on open account, tightening those terms on a selective basis to D/P terms or L/C may be in order. Credit managers should certainly keep a closer eye on existing debt and reign in any attempt of buyers to stretch out payment terms.

What about the consequences to businesses in the USA who are not traditionally involved in exporting their goods and services? Bear in mind all those billions in trade. If they become impacted, it will surely have an in-turn effect to those who sell to those exporters! Therefore, the USA would indeed see an overall effect to our economy and to each of us individually.

This is not time to panic at all and I am certainly not trying to create a picture of Chicken Little’s cry, “The sky is falling, the sky is falling.” We’re far from it. The BREXIT vote doesn’t mean there will be a UK rush to leave the EU. It will remain a long, and cautious process. However, I am merely suggesting that exporters should keep a close eye on events as they continue to unfold.

As I said at the start, Donald Trump did make a valid point about possible buying opportunities in the UK. However, that simplistic view ignores the greater world view and the overall impact of a BREXIT on us. After all, not all of us are seeking to purchase a Scottish golf course or a Jaguar at bargain prices. For most of us the greater consequence to us rests with our ability to sell our goods and services to viable buyers.

[1] NOTE: All figures are in millions of U.S. dollars on a nominal basis, not seasonally adjusted unless otherwise specified. Details may not equal totals due to rounding. Source: US Bureau of the Census

Why Use a Credit Application