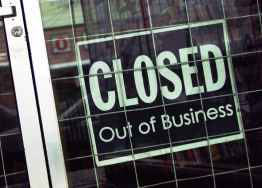 When a company winds down and closes its doors, it can frequently leave creditors holding a bill. Your debtor goes out of business. Generally, California law grants wide deference to the protection provided by corporations to shareholders and directors, and grants similar immunity to new companies. It erects a wall against the former company’s creditors, protecting the former owners and new business ventures from liability. However, there are a few rather large holes in the wall, if you know where to look.

Corporate Protection When a Debtor Goes out of Business

Corporations are, at least under current law, legal entities, separate and distinct from any single person, such as a director or shareholder. As a separate entity, a corporation can incur its own debt, own property, and do many of the other things individuals do. Although this is obviously a legal fiction, California courts take it very seriously. This means that, in general, if you granted credit to a corporation, only that corporation is liable.

But imagine that you have sold $200,000 worth of women’s jeans to First Street Clothing, a California LLC owned and operated by John Doe. After trying to collect for six months, you discover the phones have been disconnected. Research determines that First Street’s corporate status has been suspended for failure to pay taxes. Several online trade articles document the flame-out at First Street, and its subsequent corporate demise.

Based on the corporate protections described above, many collection companies would close the file at this point, but there is additional due diligence to perform. Important questions that need to be asked are: Does John Doe own another corporation, LLC, or proprietorship? Is he or one of his corporations still engaged in similar business? What provisions were made during the windup for First Street’s creditors? What happened to First Street’s assets, including your inventory which the debtor never paid for?

Unless a debtor is unusually, and unwisely, open with the creditor, answering these questions will take a legal procedure. Depending on the balance and what the investigation has uncovered, it may be wise to sue the defunct corporation, as that makes formal discovery procedures available. Even if a default is entered, John Doe can be brought in for a judgment debtor’s exam and forced to produce documents and answer questions about the finances of First Street. In my experience, just alleging alter ego and serving a debtor with an order for examination can lead to negotiating a voluntary payment.

“The two requirements for applying the alter ego doctrine are that (1) there is such a unity of interest and ownership between the corporation and the individual or organization controlling it that their separate personalities no longer exist, and (2) failure to disregard the corporate entity would sanction a fraud or promote injustice.” Cinemas v. Jaska Bldg. Sys. (2004), Cal. App. Lexis 7518.

Based on this standard, the silver bullet of alter ego is the intermingling of assets. For example, if further research determines that Third Street Apparel is selling the jeans that you shipped to First Street, or if you discover that John Doe took $100,000 from First Street when it closed and used that money to start the new company, you have a solid claim. These facts are excellent to establish alter ego, because they simultaneously prove both that there is a unity of interest, and that allowing it to go forward would be unjust.

Other facts to watch out for are: payments made on behalf of the debtor drawn on an individual’s or other company’s accounts; sharing officers or other employees; selling to the same clients or purchasing from the same providers; draws made on the corporate accounts that are not properly or clearly accounted for, or are paid to the principals as a “bonus” or simply taken.

Let’s continue our hypothetical by supposing that you have discovered that First Street Clothing gave most of its inventory to Third Street Apparel, that Third Street has the exact same corporate officers and is located two blocks from the old location, and that John Doe took $50,000 from First Street as a “severance package” when he closed First Street and used that money to start Third Street. Now what?

The simplest course is to file a creditor’s suit against Third Street Apparel and John Doe, alleging they are the alter egos of First Street, and also they fraudulently transferred its assets to avoid creditors, including you. If you have not sued the debtor yet, or if the suit has not been reduced to judgment, you can amend the Complaint to include these allegations in the same lawsuit as the collection action against the original debtor. If the lawsuit has already been reduced to judgment, a new creditor’s suit can be filed against Doe and Third Street, again alleging alter ego and fraudulent transfer.

However, it may also be possible in California to add a new debtor, in this case Doe and Third Street, directly to the judgment against the original debtor without a new lawsuit. McClellan v. Northridge Park Townhome Owners Ass’n, 89 Cal. App. 4th 746, is one case among many that expressly grants courts the authority under California Code of Civil Procedure Section 187 to add a new debtor to the judgment, but only under narrow circumstances.

In McClellan, after the Plaintiff was successful in its collection action for repair work performed at the property, Peppertree simply filed articles of incorporation for a new entity, Northridge, and continued business as usual. The court held that, because the directors were all the same, the business managed the same condominiums, and the board had started the new entity directly after the judgment was entered, Northridge could be added to the judgment directly.

While most cases will not present facts as compelling as McClellan, when a debtor goes out of business and starts a new corporate entity, some investigation is strongly advisable. It is frequently possible to at least obtain a settlement from the new entity on the old debt, and it may be possible to make full recovery. Although doing so usually requires a legal proceeding, experienced counsel can frequently obtain surprising results on a file that the client believed was a total loss.

Why Use a Credit Application