A Quicker, Cost Effective Alternative to a Lawsuit 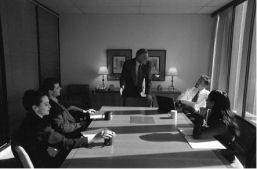 Move your receivable disputes out of the courtroom and into the conference room – and you could drastically cut your international litigation budget! Opting to go with Final and Binding Arbitration not only reduces expenses – it can speed up your recoveries as well.

What is Final and Binding Arbitration?

Final and Binding Arbitration is a form of Alternative Dispute Resolution (ADR). It should not be confused with court-mandated arbitration, which is non-binding. If used intelligently, it is one of the most powerful tools at your disposal in international collection cases.

In order to utilize this form of ADR, both parties – buyer and seller – must agree in writing that any dispute which they cannot settle between themselves will be referred to a particular arbitration entity at a particular location. The location should be the seller’s country/state/city – NOT the buyer’s. The perfect place to include such an agreement is in the credit application or sales contract.

The legal authority for the strength of arbitration in the United States is found at both federal and state levels. The United States Congress, in adopting Title 9 (The American Arbitration Act), has clearly stated that it is the national policy of this country to favor arbitration over litigation as a choice of forum when there is a written Arbitration Agreement existing between the parties to a dispute. Title 9 has been upheld by the United States Supreme Court in many decisions. At the state level, all 50 U.S. states have laws regarding Alternative Dispute Resolution in their jurisdictions.

The international community has also long recognized the significance of international arbitration. In 1958, more than 85 countries signed the New York Convention on the Enforcement of Foreign Arbitral Awards (a United Nations treaty), which guaranteed that each participant in the Treaty would enforce the arbitration awards of other participant jurisdictions. To date, 144 countries have signed the 1958 NY Convention, including 142 of the 192 United Nations members.

What are the advantages of Final and Binding Arbitration?

Once the parties agree to the arbitration process, neither can change his/her mind at a later date. In fact, if one of the parties refuses to arbitrate, the other party can compel arbitration by court intervention.

Generally, arbitration doesn’t take longer than 9 months from start to finish; making it much faster than litigation, which can take years. Once an Award is made, Judgment on Arbitration can usually be obtained within 60 days by submitting a Motion to the appropriate court w here the losing party is located. With Judgment on Arbitration in hand, you are then free to pursue post-judgment remedies, just as though you had gone through the litigation process.

What is the real effect of all this for the seller/creditor?

A Final and Binding Award is almost always irreversible when it is made by a competent arbitration body against a debtor residing in a signatory to the 1958 NY Convention. There are practically no grounds for any appeal process or judicial review of an arbitrator’s award.

Let’s make that last statement a bit stronger. Judges are actually forbidden to review an arbitrator’s award with respect to case merits and they are compelled to uphold the final and binding nature of the award, with only some narrowly-defined exceptions, including:

What does arbitration cost?

In terms of money, arbitration can be more or less expensive than litigation depending upon several factors:

The fees charged by the American Arbitration Association can be found at http://www.adr.org/si.asp?id=5379.

Arbitration between two parties located in the same country may be somewhat expensive compared to domestic litigation, especially in cases where the attorney fee is partly or fully contingent upon collection. However, if your buyer is located in Tokyo and you are in the United States, the arbitration fee becomes insignificant compared to hourly fees of a Japanese attorney plus travel costs for a witness to go to Japan. The same principle holds true for a seller located in, say, Malaysia; that is, arbitration in Malaysia is far less costly than having to fly to the United States to support a law suit.

When we examine the comparison of cost between litigation and arbitration, the “time to resolution” becomes a key factor. While a contested lawsuit between domestic companies in the USA can take as little as 12-18 months to gain a Judgement, you may be facing a civil process lasting 5 years or more abroad. It is common in those overseas jurisdictions, where the process takes the longest time, to also see lawyers charging hourly and dearly for their services. The longer the process the greater is their compensation. The worldwide average for the complete arbitration process is 9 months from the date of the start of proceedings to the issuance of an Award! Clearly, arbitration has the “time to resolution” advantage and vastly mitigates the amount of hours ultimately to be charged by counsel abroad when it comes to the enforcement of any Award.

What are the tactical advantages of arbitration?

Adding an Arbitration Clause to your credit application, contract, or other document permits you, the seller, to specify jurisdictional location and method of recovery. It also gives you the right to determine the language of the arbitration, the number of arbitrators, and to include the requirement that the losing party pay all arbitration expenses. (See the sample Arbitration clause below.)

It is always advantageous to fight a battle on your own ground. It puts the burden on the other party to travel to your corner of the globe. In fact, because of distance, most foreign buyers totally ignore or refuse to take part in the arbitration process, thus resulting in the issuance of a Default Award.

Lawsuits can be overturned by the appeals process; a remedy almost never allowed under arbitration.

A legal judgment issued in your country may not be enforceable in the buyer’s jurisdiction. You may be required to start the entire process over again in the buyer’s locale, despite a court judgment in your favor.

Note that the United States does not have reciprocity of legal judgments with any other country. Whereas, if both the seller’s and buyer’s countries are signatories to the 1958 NY Convention, the local Court is obligated to uphold the award with only some narrowly-defined exceptions mentioned above.

The setting of arbitration is far less imposing than a courtroom. Arbitrations generally take place in conference rooms and are attended by relatively few people. The atmosphere is more relaxed, and testimony can be given with much less nervousness than in the cold environs of the court.

The burden of proof in arbitration is much more in the creditor’s favor. The test of evidence applied by an arbitrator is one of “What should reasonably be considered by the common man.” The civil law (litigation) test is the “preponderance of the evidence.” Under civil law, very strict rules apply in laying a proper foundation for the introduction of evidence. The arbitrator, however, simply applies the guide of “reasonableness.” If you have seen debtors contrive outrageous counterclaims in the civil process, which can only be dispelled by hard-hitting contravening testimony, then you can appreciate the value of the test of “reasonableness.”

A sample clause adapted from the American Arbitration Association may be modeled on the following text:

How do you circumvent the games debtors play?

Preventing the debtor from claiming he was not properly notified is easily thwarted.

The arbitral authority sends both parties the notices of arbitration, so your best defense is to:

This is clearly not a requirement of the arbitration process and is not a requirement of Courts for the sake of enforcement. However, if you do take this extra measure of due diligence, Courts will certainly take notice of the effort and it will lend greater weight to the validity of your contention the respondent was properly noticed. Conversely, it will place a much greater burden on the respondent to prove otherwise.

At this point, your representative can submit a motion to the Court to stay the proceedings pending the outcome of the Arbitration, thus forcing the debtor to the arbitration table.

Since the outcome of the arbitration is likely to result in an award, the same court will be required to hear a motion for Judgment on Arbitration. It is more economical for the Court to merely stay the litigation than to dismiss the lawsuit.

In addition, since the lawsuit was filed “in good faith”, it would be an undue burden on you, the plaintiff and creditor, to present an entirely new lawsuit to the same Court when one lawsuit should be sufficient. Even if the court refuses to stay the litigation and insists upon dismissal, your lawyer can plead for the court to compel the participation of the debtor in the Arbitration. Either way, you end up with a firm court decision that the debtor must participate in the Arbitration process.

Certainly, Arbitration is not some form of magic bullet to cure delinquencies or the process to enforce your rights. However, if the process is approached intelligently and with tactical consideration, it will go a long way to improving your process and cost factors.